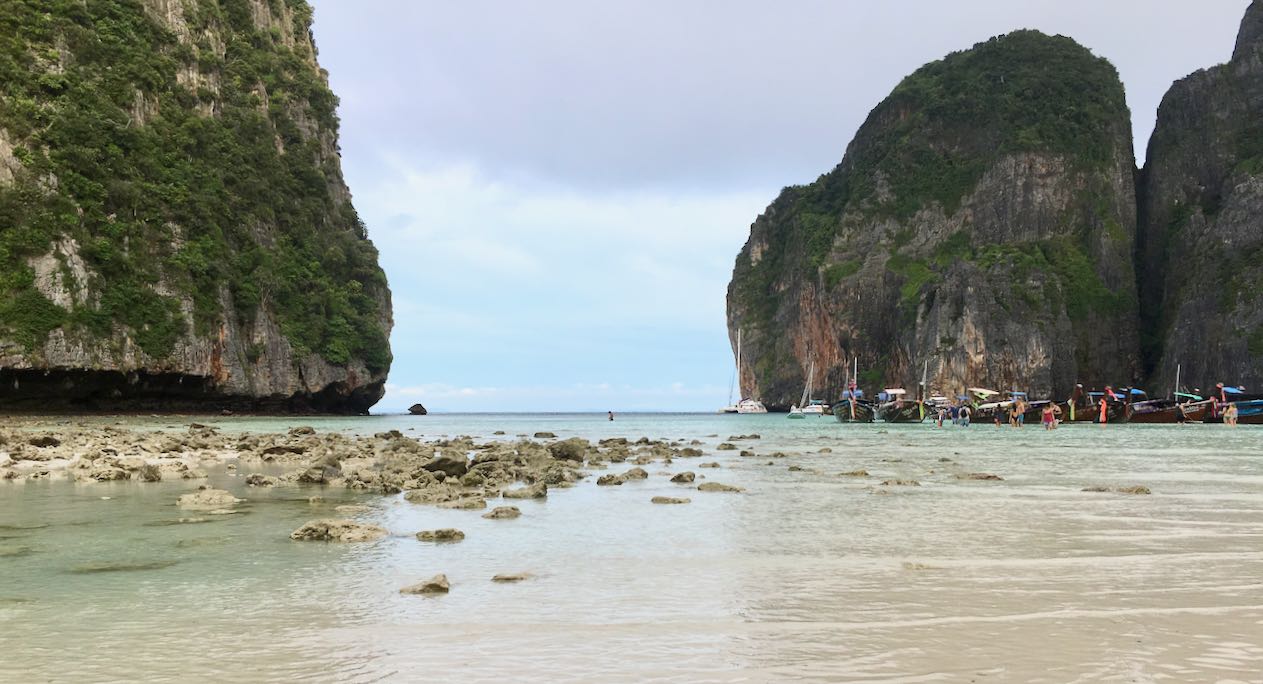 Back to my boat trip around the southern Thai Islands and onto Ko Phi Phi Le which is more famously known as the beach that features in the film ‘The Beach’ from 2000 staring Leonardo DiCaprio. It was a must visit kind of place if you are in the area as I have seen the film a number of times. We were advised that it gets extremely busy so we moored up for the night in the bay so that we could get onto the beach at the crack of dawn before a million other people arrived. At about 7am we went ashore but others had had the same idea so it wasn’t as quiet as I had hoped even at that hour of the morning!

The water is beautifully clear and is a delicate pale green colour partly because the sand is a beautiful ivory colour underneath. As time went on it became much more churned up as more and more boats and tourists arrived loosing its crystal clear qualities but was still a beautiful colour. The small Island has been entirely overrun by the tourism bug and now has big colourful signs, places to eat, toilets and much more. Apparently for the set of the film palm trees were imported to make the perfect beach even more perfect and it feels like that kind of theme has continued. I think its fair to say that for most tourists these days a ‘perfect’ beach is not just about the sand and sea but the ability to order a cocktail and some nibbles and easily use a loo. So if you don’t mind sharing your ‘perfect’ beach with a million other people then this is for you, however that is not at all my idea of perfect I would much rather just have the beautiful beach minus all the rest.

The Island is not very wide so it only takes a few minutes to walk through to the other side by way of a man made path where there is a slightly rickety wooden structure comprising of stairs and a viewing platform to see the view out the other side but again so full of people, even at 7am in the morning, I can’t imagine what it gets like later in the day.

It turned out to be one of those places I am glad to have seen but won’t be going back anytime soon. As you might have noticed throughout this blog I generally prefer photos without people and this place really stretched my ingenuity on that count! I purposefully didn’t take pictures of all the tackiness as I would rather visually retain some of the original beauty of the island for those who haven’t visited as once upon a time (pre 2000) it would have been completely stunning.

There were little pockets of peace at the extremities of the beach so I did manage to have a few minutes of thoughtfulness and enjoyment of the surroundings before we left and hurried away to somewhere much less people populated!