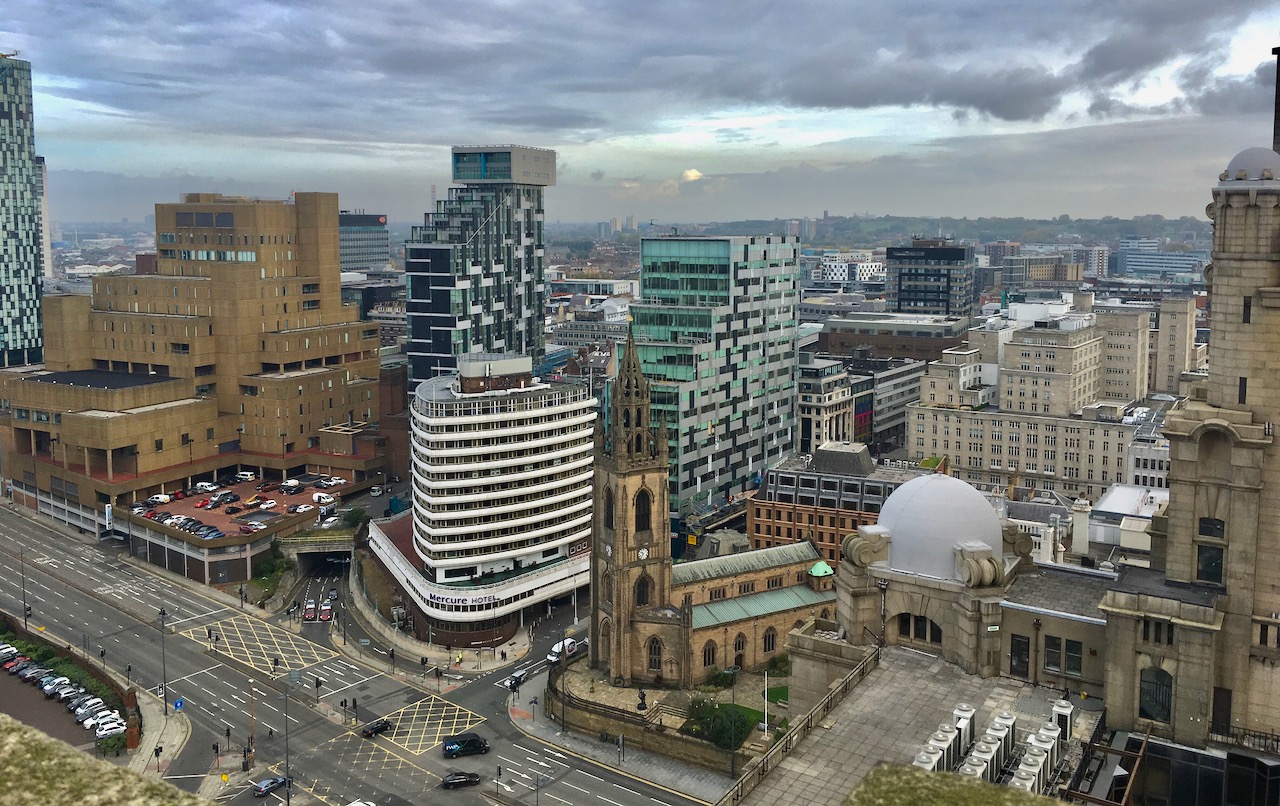 A few weeks ago I had a quick visit to Liverpool. I’m not really sure why but had never been before, so it was one of the cities on my list to become aquainted with. I stayed for one night in the Ibis Styles which is very central and most things are walkable from there. The decor of the hotel leaves you in no doubt as to which city you are in!

The first thing I do anywhere I visit is to have a general wander around and get my bearings. I discovered that I was very near to the Cavern Club at number 10 Matthew Street where the Beatles used to be found on a Saturday night in the early sixties. It’s full of the sound of live music and nice food smells enticing you into one of the many food places. On from there you reach the shopping area which is substancial with anything you might want to look at and on up past the Bombed out church on Leece Street which at dusk is particularly beautiful and poignant. The statue depicting the christmas truce at the frontline on 25 December 1914 where soldiers came together to play football, amoungst other things, is very powerful. On up the hill from there the smells of a lovely greek resturant sucked me in for dinner. Grilla at 22 Hardman Street is friendly and serves delicious food. On a Wednesday they offer 30% off mixed souvlaki for two!

The next day was a prompt start to get down to the docks for a tour up to the top of the Liver building. A fascinating experience especially with the 360 degree film extravaganza up in the clock tower and of course the views across Liverpool from the very top!

Then a stroll along the to the Albert Docks only five minutes away where I particularly wanted to visit Tate Liverpool. You pass by the museum of Liverpool on the way but I didn’t have time to go inside on this trip.

Into Tate Liverpool proudly standing at one side of the gentrified docks with stunning reflections across the water. I spent time in the regular collections which are free with a wide range of work, some of my favourite bits included Lowery, early Picasso, Peter Black, Robert Delauny, Bridget Riley, Gwyther Irwin, Bruce McLean and Piero Manzoni and of course a nice cup of earl grey and a suprisingly good gluten free fruit slice!

On from there was a bit of a stroll up to the Catherdal which is the longest in the world, I think I’m right in saying, and most definitely the biggest in Britain. It is worth having a wander through the Georgian Quater to see the lovely old buildings but more imortantly take a pitstop at one of the many eateries for a tasty something to eat. I ended up in The Blackburn House Cafe enjoying a delicious middle eastern lamb and pepper casserole.

On the way up the hill you will pass the HUGE chinese gate which was a total suprise to me, what an amazing and colourful structure!

After a good while absorbing the peaceful atmosphere and spectacular architecture of the Cathedral it was a walk back down the hill into town and to search out Bluecoat Liverpools centre for contemporary arts. Situated in a Grade One listed building in the middle of the shopping area it supports many artists and makers as well as an interesting programme of events and exhibitions. There is a lovely shop and cafe and the courtyard really is a bit of a tranquil haven in the centre of town! A nice place to end a busy day and rest before getting the train home.