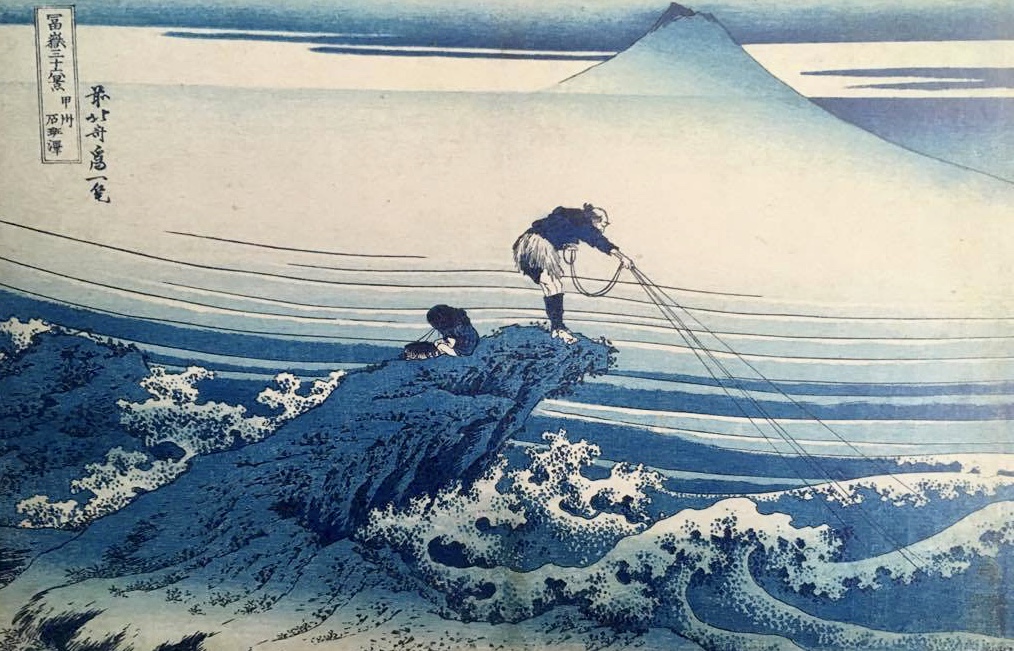 Earlier this year I had the utterly delightful opportunity to see the ‘Hokusai – Beyond the Great Wave’ exhibition at the British Museum. It left me a bit speechless. I have been to hundreds of exhibitions over the years of all sorts of art but I can honestly say these where some of the most beautiful prints I have ever seen, coupled with the awe that they have survived 200 years in such mint condition. There is something very timeless about them.

Hokusai is best known for his print of a single big wave which these days can be purchased as a reproduction on every surface imaginable from mugs and shoes to tote bags and beyond! He is an inspiration in as much as he continually experimented and pushed boundaries until his death at eighty eight. He didn’t rate his own work until he was seventy dismissing everything that had gone before, always sure there was more to learn. We can all learn something from him in relation to whatever we do, always seek to learn continually push boundaries and never settle keep moving forward.

I loved all of his work but my ultimate favourite collection are a set of prints that are solely made with Prussian blue ink. They depict general life in Japan at sea and on the land. There is something very beautiful and subtle about the many tones of blue maybe its just that blue is calming and soothing, I don’t know there is just something very special about them. My pictures here don’t really do them justice it is one of those occasions where if you can you need to see them in real life nothing else will compare!

Theres is a fantastic fat catalogue that comes with this show and goes by the same title. I think its available from the British Museum shop. Really worth buying if you are interested in this kind of work.

One final thing I learnt from this exhibition was the origins of Manga drawing. Having taught art at art college for twelve years one constant cause of frustration was many students obsession with Manga. Now there’s nothing wrong per se with manga but when you are trying to teach students how to look and observe the world properly and they constantly draw made up stuff they don’t learn. They look at their favourite animations and think they will make their millions copying not understanding that those artists have spent many years drawing from the real world to enable that skill to translate into animation. Hokusai has many many sketchbooks of drawings from the real world observations of every detail of the world around him and these are original ‘manga’ drawings. If I’m ever faced again with students drawing manga instead of observing properly I can feel a lecture about Hokusai coming on, be warned!

Filed Under: Books, Colour, Japanese
Tags: colour, Japanese, printmaking, prints
Sewing in the sun.
How to preserve your windfalls (or someone else’s) Part one – Sweet
Searching is in progress