Taking on a challenge – climbing a mountain 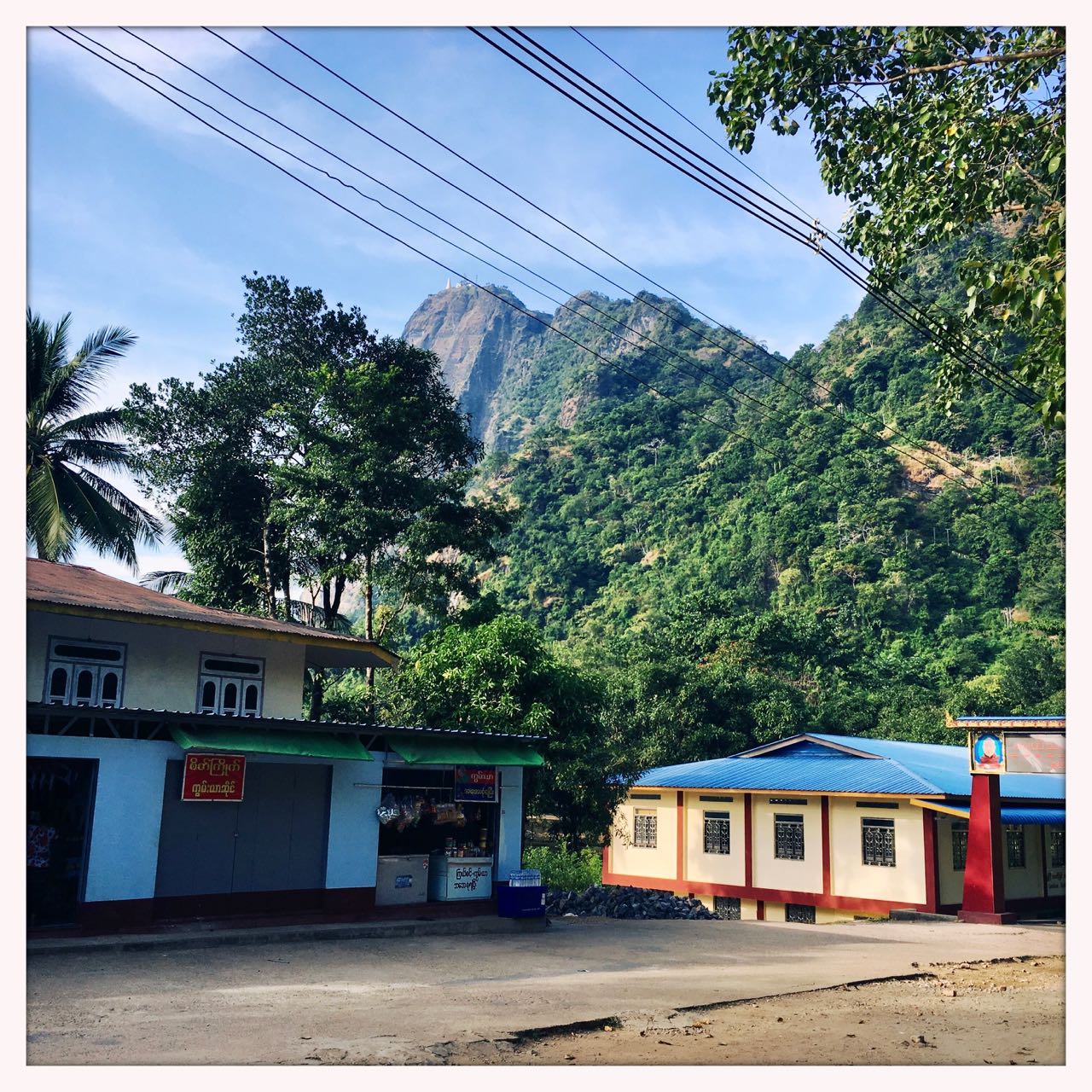 From Yangon we took a night coach to Hpa-An which is about a nine or ten hour drive to the east. That in itself was an interesting experience. Even though it was a night bus which one would assume means that some sleeping is expected it had load music playing for the entire journey! I have the great super power of being able to sleep in any situation so did so but my two companions were ready to kill someone by the time we arrived having had zero sleep.

One of the challenges we set ourselves on this trip was to climb a mountain. Now none of us do this regularly, I am used to steep hills living in Sheffield and walking everywhere but this was in a totally different league!

This is Mount Zew Ka Bin a bumpy tuktuk drive south from Hpa-An. At the very top there is a monastery and it takes about two and a half hours steep climbing to get there. We had a bit of a restricted time scale due to the tuktuk waiting for us and the other things we wanted to fit into the day.

As you turn off the road and start to travel along the path towards the foot of the mountain you become increasingly aware of thousands of buddha statues filling the fields that surround the mountain, they literally go on for miles.

There is clearly an ongoing project to restore and paint these statues which I suspect is a permanent job for someone as once you have finished the last one it would be time to start all over again. I am not a hundred percent sure what I think of all the restoration as everything is painted so brightly as new. It really takes away and patina of age and the story of these statues but seems to be the way most of south east Asia. There is something endearing about the unrestored statues and it gives rise to thoughts about their past and the environmental effects on the materials and I always love an object with a story. See what you think.

As we got nearer to the foot of the mountain the buddhas changed and clearly had not been restored so far anyway. These were beautiful and almost hidden amongst the grasses and trees. The more you stared the more statues you began to see emerging from the landscape. It is a truly beautiful and tranquil sight with these statues showing signs of the environmental effects of living in the landscape and becoming harmonised within their surroundings. It is worth visiting this place for the buddhas even if you didn’t want the challenge of climbing the mountain.

So onwards and upwards. The climb is in the most part steep stairs of a variety of shapes and sizes. This actually makes for a difficult climb as it is hard to get into a rhythm. There are some areas of path in a couple of places but not much. About half an hour into the climb there is a stopping point with taps and water. We weren’t sure about drinking the water and had come prepared but what it was very useful for was tipping over ones head to cool down!

At this resting point there are a few buildings it kind of looks like there is development in progress and maybe one day there will be a shop or cafe there but currently there is nothing except the taps. There is also a mini pagoda or stupa again highly painted so I cannot give a guess as to its age.

About an hour into the climb we came to a clearing in the trees and could start to appreciate how high we were getting by the view. You can see for miles. The area is a very flat plain with the occasional mountain bursting from the ground.

The mountain path is lined with interesting flora and fauna and we encountered many birds, dragonflies, butterflies a centipede and a couple of crabs. Yes I did say crab they are a fresh water variety quite unique to south east Asia and something new to me. When my friend said she had seen a crab half way up the mountain I thought the heat had got to her at first! But we did see more  as the day moved on so unless we had all been hit by sunstroke and hallucinations there are indeed freshwater mountain crabs. I collected several small specimens of plants to press in my sketchbook and use later to create some cyanotype prints which I will share with you in a separate post.

Two hours into the climb we reached the top of the mountain. It is still some distance along the ridge theta to reach the monastery and our time was fast running out so we took a group decision to call it a day at that point and return to the bottom, not really knowing at this point how long that would take. We took a number of celebratory photos at the top. Below is my attempt at high altitude yoga!

and the view…definitely worth the effort!

Searching is in progress