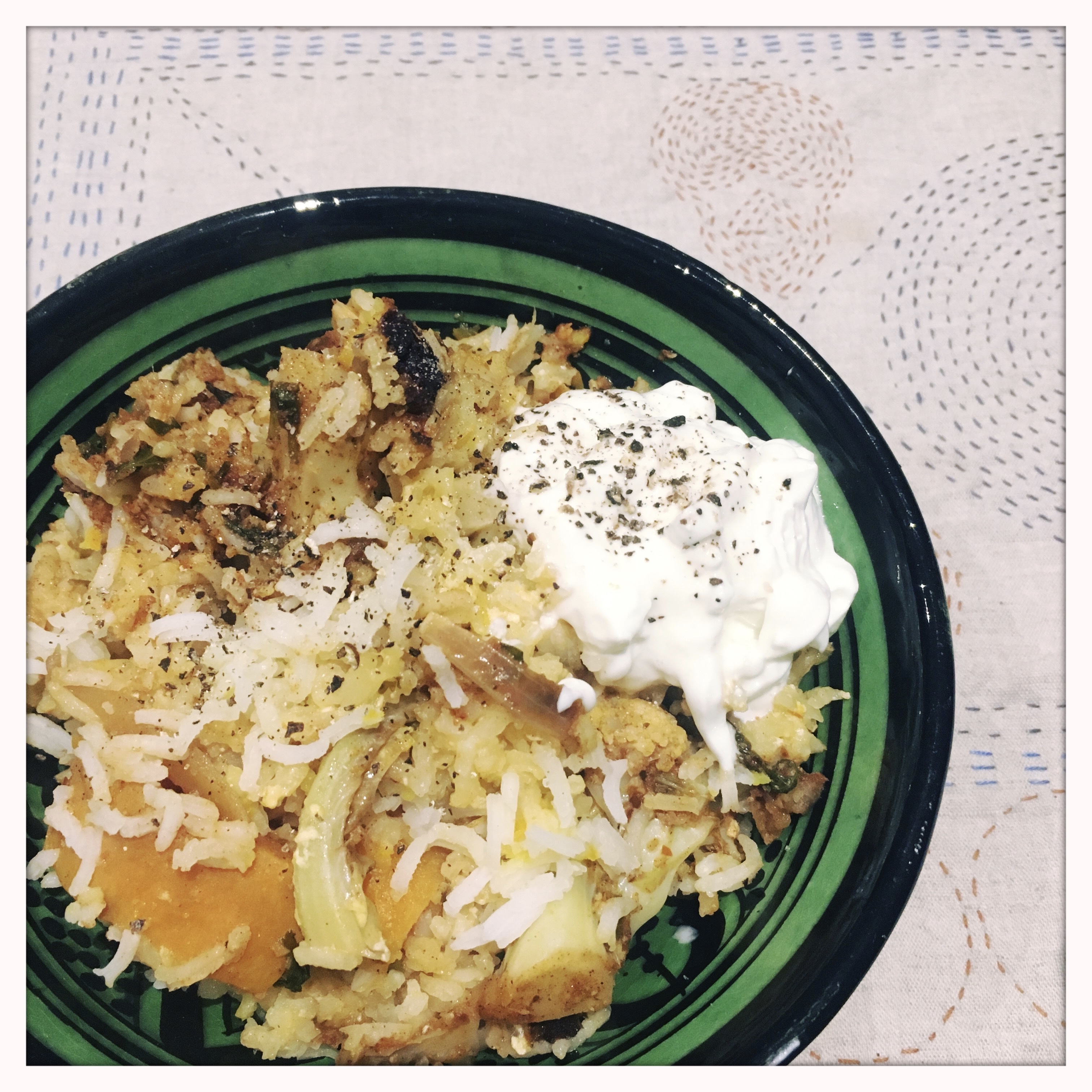 Before I start, just to be clear, I am sharing with you what I did to make a biryani pure and simple. I am not claiming this to be a definitive recipe but it did taste good and I would do it again. I took most of the recipe from a fantastic book I bought while in Tamil Nadu by Sabita Radhakrishna. The original recipe is for mutton biryani but I have changed it to a vegetable version simply because I had vegetables around I needed to use up.

First of all you need to rinse some basmati rice several times to get rid of some of the starch. Then leave that to one side while you prepare the curry sauce. Place two large tomatoes roughly chopped in a blender with three cloves of garlic, a good amount of root ginger, a heaped teaspoon of cinnamon and some chillis (either dried or fresh and the amount depends on your own taste). Blend them together and this will be the base of your sauce.

Next prepare your veg. I used potato, cauliflower, sweet potato and onion. Peel and chop into similar sized chunks except the onions which should be in long slithers. Gently heat some oil, ghee is good, I used rapeseed because that is what I had to hand. Add four cloves, some curry leaves and a little more chilli and quickly toast being careful not to burn them. Add the onion and gently fry until golden brown. Whilst this is cooking chop a generous bunch of fresh coriander and then add it to the browned onions. stir around and allow to cook for a minute or two before adding the tomato sauce mix.

Let the ingredients mingle together and fill the room with delicious aromas. Add some salt and pepper to taste finally adding the chopped veg. Pop on a lid and leave to cook until the veg begins to get tender. It is important not to over cook the vegetables as they will cook some more when the dish is assembled so al dente is what you are looking for at this stage. If it gets too dry add a splash of water but it shouldn’t become too wet as this will result in a stodgy end result so keep a close eye on it!

While the vegetables cook place the rice in some boiling water to part cook. As with the veg it needs to be al dente at this stage  and will cook more later. Gently heat some milk and saffron letting it infuse and turn the milk a beautiful golden colour. Take it off the heat and let it stand and continue to infuse. When the rice is al dente rinse under cold water to immediately stop the cooking process and leave to drain thoroughly. Squeeze the juice of a lime and leave to one side.

To assemble use a heavy bottomed saucepan with a tight lid the aim is to keep the heat and steam inside the pot while it cooks. Start with a layer of vegetables then a layer of rice and alternate to use up what you have ending with a layer of rice. Poke some holes in the mixture and pour in some lime juice and the milk. To cook the pot needs the heat to be defused so it doesn’t burn to the bottom of the pan and cooks gently. I used a tawa (chapati pan) to put my saucepan on any solid frying pan would do. Leave on a low heat for half an hour and don’t be tempted to take a peek as you will let all the steam out if you do!

At this stage I suggest a large gin and tonic and some popadoms of your choice to keep you going as the biryani cooks through.

When half an hour is up lift off the lid and take in the delightful aroma filling the room. Spoon out into a dish and serve with some good thick natural yogurt seasoned well with salt and pepper. I have found this dish freezes quite well so it is worth making a big pan full so it provides you with several meals.